Protest the planned execution of Hank Skinner on March 24th! 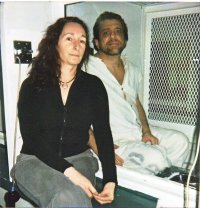 Here for the benefit of those not on Facebook is the substance of today’s plea from Sandrine Ageorges-Skinner. With only a few days remaining for the Board of Paroles and Pardons and Governor Perry to grant a stay of execution so that critical DNA materials can be tested, it’s important to do whatever you can to petition the State and secure a chance for Hank.

Too many death row prisoners have been exonerated upon DNA proof of innocence. Too many people have been executed on unsafe grounds. The criminal justice system is not perfect. Please – Help give this man the chance for life he deserves.

Hank’s clemency petition is seeking a commutation of Hank’s death sentence to life in prison in order to enable him to prove his innocence and seek a pardon.

or use the online letter signing page set up by the Innocence Project here:
http://www.change.org/innocence_project/actions/view/order_dna_testing_for_hank_skinner

THANK YOU ALL FOR YOUR SUPPORT!

All the details of the case are available on the website, however, here are some of the points you can raise:

Both petitions (commutation and reprieve) as well as three statements attached to the petitions can be dowloaded in the “legal documents” section of the website.

One Response to “Protest the planned execution of Hank Skinner on March 24th!”

« Event: Voices for Death Row Inmates – London, UK, April 2010
Hank Skinner: What should we hope for next? »
%d bloggers like this: